google-site-verification=DucKvI54srqc0kdChWeFEGLde024hACc_OKK5qC27f4
Dance Exchange's Creative Aging Cohort  Fall 2020 - Spring 2021
Becky is excited to join a multi-generational cohort selected by Dance Exchange that will work to develop tools and practices to support creative aging and intergenerational exchange. Dance Exchange’s Creative Aging and Intergenerational Exchange Program harnesses the power of our creative tools and practices to create opportunities for movers of all ages to cultivate lifelong connection, creativity, and meaning. Come take a Creative Aging class with Dance Exchange on Thursdays at 11am and sign-up for their winter institute. Keep your eyes open for May 2021 a creative aging movement festival will be coming to you.
ONEBEAT - Becky was selected as a 2019 OneBeat fellow as a percussive dancer. OneBeat brings musicians (ages 19-35) from around the world to the U.S. for one month each fall to collaboratively write, produce, and perform original music, and develop strategies for arts-based social engagement. OneBeat begins with an opening residency, when Fellows collaborate to create original material, record new musical ideas, and incubate their projects. OneBeat fellows then go on tour, performing for a wide array of American audiences, collaborating with local musicians, and leading workshops with youth. This is an initiative of the U.S. State Department’s Bureau of Educational and Cultural Affairs in collaboration with the groundbreaking New York-based music organization Bang on a Can’s Found Sound Nation, OneBeat employs collaborative original music as a potent new form of cultural diplomacy. 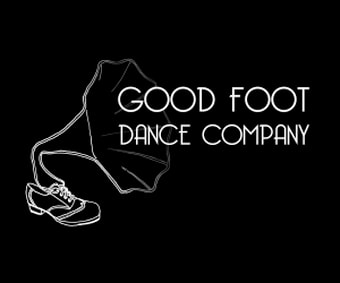 Good Foot Dance Company,  explores the complex cultural twinings of the root-system of American vernacular dance, from Appalachian flatfooting, to tap, to contemporary urban dance. By mixing and remixing traditional dance and music and bringing a critical and historical inquiry to the shared history of American dance cultures, they raise questions about connectivity, continuity, and social responsibility. At the core of Good Foot Dance Company is the partnership of Emily Oleson and Matthew Olwell and they often collaborate with  guest artists.  Becky Hill  has been involved with the company since 2011 and has performed with them at Jacob's Pillow, Newport Folk Festival, Wheatland Music Festival,  Sheperdstown Appalachian Heritage Festival and numerous others. 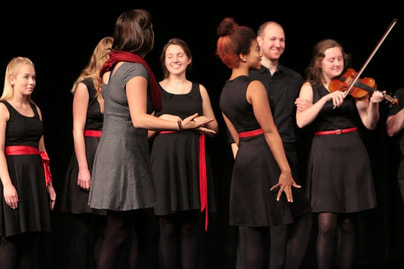 The Davis & Elkins College Appalachian Ensemble is a student performance group led by Dance Director, Emily Oleson and String Band Director, Emily Miller and Tour Manager, Becky Hill. The Appalachian Ensemble is dedicated to bringing live traditional music and dance to audiences in West Virginia and beyond. The group focuses on the intersections of different American Vernacular forms and their roots, ranging from old-time music and flatfooting to jazz music and tap dance, to Irish step dance and numerous traditional American styles of harmony singing. The show includes a variety of regional dance styles, contemporary choreography, and a selection of traditional songs and tunes performed by the Appalachian Ensemble’s string band.  All students receive scholarships for their participation in the ensemble. Auditions are open to talented dancers and musicians who are interested in attending D&E and performing with the ensemble. Becky was one of the founding directors of this ensemble and is very excited to see it grow into what it has become. See the Appalachian Ensemble YouTube Channel. 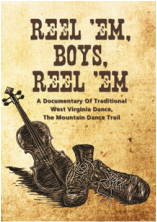 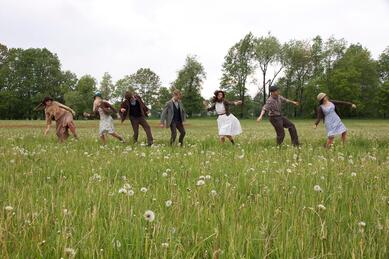 Carry It On… is a Dance for Camera film created, performed and shot on site at the Wernette Farm outside of Remus, Michigan, home to the Wheatland Music Festival for the past 40 years. The film focuses on the sacred power and potential of place and our relationship to it. Moving through, with and around open fields, a pine grove and an old stage, a cast of dancers and musicians explore humankind’s relationship to the environment and our universal need to gather. Choreographed by Sharon Leahy, the film was selected for the ﻿﻿San Francisco Dance Film Festival, International Screen Dance Festival and the Dance on Camera Festival.  Becky Hill danced in the project and was mentored by Sharon Leahy to create two new pieces of choreography for the Carry It On... live  performance, which premiered at Wheatland Music Organization's 40th Festival  in September 2013.
See the trailer on the LeahyGood YouTube channel.
Powered by